I don’t want to be larger than life. I want to be approachable and down to earth. I don’t wanted to be liked by the majority, but if I can’t be I want to understand why so that I can be accountable. I’d like to relax, but I’m impatient with the frivolity of wasted time. I’m sitting here now looking at my clock, on a Sunday, feeling guilty for sitting because there is always more to do. Besides, I was lazy yesterday, mostly.

I’ve got a lot to do to build my business and I will admit that I have allowed myself to explore maybe too many options. I am allowing myself to explore every option actually. My soul is open to the big picture of my life. I won’t profess I need any one absolute in order to succeed, but my business, my business is mine.

I want you to know that I am crying right now and I am glad for it. I sometimes feel this terrible pressure inside of my being, a gnarl inside the back of my heart. The entire day has been productive, everything is coming together, and still I am a cave. My belly is a hollowing echo of ravenous hunger and I am not hungry.

Have any of you reading ever had that feeling? and if you can’t relate do you at least know how it feels to be hungry with nothing sounding good? The very idea of food makes you queezy and yet your body is reminding you of a very real need. I sat down to write because I am feeling sick with something that is not illness, but it feels that way. Sometimes I feel like my soul is trying to escape from the corpse it keeps living. Writing is an exorcism.

I’d really like to know that I am not alone in understanding. A good friend of mine suggested that most people don’t even like to think about the things I think about, “You need to first have a thought to understand it. People don’t care Amber. These are things you care about. We all have other issues we are focusing on.”

I knew she was right the day I sat across from a business woman who told me she hates everything about business and she especially hates selling. The irony being that not only did the woman work in business, she owned the business and worked it as the exclusive sales rep. I could tell by the look on her face that she wouldn’t let me make the identification in her. My conclusion being that the business portion, the money portion, was just happenstance. She was content to have just enough to allow her family a little more to travel with. She did not want wealth, or any complex structure. She wanted her business to generate just enough for them, the core of her family, to be among the middle.

I am exactly like her, except I am hungry to give back. I want my business efforts to create so much positive energy that the good is residual.

I’m not taking vacations. I’m not going out with friends. I’m devoted to devising a strategy that will allow me to provide economic growth for our community and yes, I know that it’s not my responsibility. Except that it is. I was put here on this earth to contribute a greater good and as much as I’d like to be selfish I am haunted by those images you keep showing me. The ones of little babies covered in flies. It is a perversion to sit in front of a television screen not knowing if you can spare fifty cents a day to sponsor a child, while a puppy somewhere in America has the very same pleading eyes.

“Are you kidding? You want me to spend a whole dollar? I don’t even save that for myself and what about my own children?”

And just like that I am a baby killer and a PETA outcast. 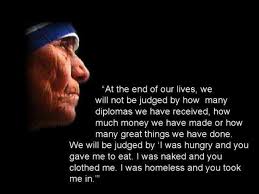 A giving cause is not always giving TO THE cause. I’m going to tell you a story about a gentleman who is doing great things in the wrong sort of way. I met this man back when I was single, and he was the most promising prospect until I fell in love with someone else. He was on paper everything I had written I wanted to find in someone. He came from a good family, had been married to the love of his life only to lose her after twenty or so years of marriage because he was selfish. My gathering of it all was that. She left him because he is selfish and yet at the same time he is the most giving man there is.

I say that this man was exactly as I had written because he was. I wrote that the guy I wanted to find would be a humanitarian. I imagined him polished and dressed like James Bond. I pictured him relaxed, and at ease with life, assured and steadfast. Things were easy for him, but then that was the blessing because it opened up time for charity. This real life gentleman travels to Mexico to help orphans with his travel club. That’s another thing I wrote I would have in my new life. I wrote that I would travel the world and there he was telling me that I could do exactly what he is doing.

“YOU SHOULD BE HERE.”

I should be? Are you going to pay for my flight or better yet cover my bills and the debt of inactivity. Sole-proprietors PRODUCE. We produce until we burn out our own battery and here you are wanting me to pay to fund your vacations. ARE YOU F*CKING KIDDING ME!!!!!

The humanitarian, the dashing debonair, is a member of a NETWORK MARKETING travel club. His only interest in me was that I help fund his trips and promote them.

Of course I didn’t realize that is what he wanted from me at the time. I had assumed that found me brilliant because I am. I am smart enough to know when I am being swindled and this whole travel club action was the real deal, but I was not his target demographic. I don’t take vacations. I’d rather write about them for free.  He was wanting that exact exchange. He wanted me to work for free (which I did) and he also wanted me to put down my own money, while agreeing that I would leave and tell my friends that they should put down their money too.

I’m still flabbergasted that my television keeps asking me to invest fifty cents, or a dollar for fur. He wanted THREE HUNDRED & SIXTY FIVE DOLLARS SO HE CAN TRAVEL MORE.

I must be dreaming?

I started to post my dreams publicly because I felt like I might never know many of them to be real. The humanitarian I met when I was single, my prince on paper, was just a crumple of a draft. I totally dig a global effort, but don’t piss on your own soil. I was near to be homeless myself when my night in shining armor came to offer me light. He passed me off to some other chick in his club, someone who is  “totally RAD” that I should “LOVE.” She took me out to go shopping with her, while I had just sold my refrigerator so I could afford to buy my daughter a flute. I friend of mine lent us a mini-fridge after so we could keep some food and here was salvation in the form of TRAVEL and HELPING ORPHANS.

I just needed $365 to get started. If I could find a way to scrape up $365 extra dollars I could save the world.

YOU SHOULD BE HERE

Instead I went home with a pair of running shoes that cost me food I couldn’t fit in my mini fridge anyway. I needed the shoes, but then my daughter needed one birthday present that year and she did not get one from me, not one. Of course she thinks I don’t love her. I have new shoes and she has nothing from me and more to show from her father. I must be a loser.

Yes… I should be there with the WINNERS.

Let me be at a place where $365 holds the weight of the world. Help me with that, and then I’ll relax a little, because this is the way I feel from where I am sitting too tired from hard work. I feel like when I needed help HERE, you were on at a resort drinking martinis and when the bill came you asked me to pay for them.

The moral of this story is that if I am going to save the world I need to take care of the people around me first. I need to address the need in front of me and there is much of it.

I did sponsor one of those children you see on TV and someday I will join that travel club to help orphans, unless I decide to help without a club.  I struggled with writing this true story because I did not want to negate the good of the program, or the good of the man I wrote about. The people in his club work hard and it’s not fair to imply that they shouldn’t enjoy the leisure and fun of a rewarding life.