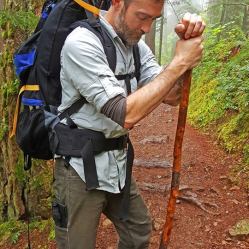 I took up writing with a fever the day he told me that we are done as a couple. Before that I had only been half trying. I let go of most of all I had planned for myself when I realized that my choices would hurt him.  I did not want to lose him as I had before and I was worried that it was my writing more than me. Of course it had to be. It had to be my choice to be public. Why would anyone want to live that life? Or the scrutiny?

People think so many things I do not want to be attached to until I sometimes wonder if I want to be included by society at all. What if I do not agree with the majority? What if they do not agree with me? What if I have no right to have the mind I have? What about the privacy of his? His mind is private and closed, while people assume that I am open for the public.

There is a scene I am thinking of now. It’s from a television series we watch together. Game of Thrones. I love the story line because it tells us what life is through a different parallel: same story, different world. Does the world change by confession followed by repentance? My question as I relive seeing Cersei Lannister standing naked in front of a city that hates her. She was once queen of all the seven kingdoms before her fall from grace.

Except she never was a lady of grace. Cersei Lannister is a woman of great power and influence. She is also calculated evil and corruption, full of secrets and whispers,  just as the rest of the rulers are and were before her. I despise her most of all as I watch from my living room couch. I eat popcorn while I wish for her ending, while I wish for her death. I want her to suffer by slow torture, in the exact same manner in which she herself has hacked away at the lives of other people. Cersei Lannister is a terrible human. I wanted her to be disemboweled by a hook. Instead, a priest hacked off her hair and tore off her worldly garb as punishment. I was disappointed until I realized what he intended to do to her next. This is what he said before he pushed like meat into a sea of angry people who all wished they could get close enough to pulverize her.

“She has committed the acts of falsehood and fornication. She has confessed her sins and begged for forgiveness. To demonstrate her repentance, she will cast aside all pride, all artifice, and presents herself as the Gods made her. To you. The good people of the city. She comes before you with a solemn heart, shorn of secrets, naked before the eyes of Gods and men. To make her walk of atonement.”

The nuns pushed Cersei Lannister into the street to walk her shame before the public. Cersei held her head regal, shoulders back, until her breasts were high like her slanted nose. The same nose that had always been turned against people was now flaring in fear. Her nostrils were the only visible panic I could see as I watched her descend into the crowd.

I wondered if the people were going to swarm her like zombies in an apocalypse. At first they did nothing but stare, blinking their eyes as if they were temporary blinded by her glory. She passed through the crowd so easily at first I began to feel like they wouldn’t harm her. I wanted to be there to make them do something. I wanted them to act out and then they did.

It was a man that threw the first obscenity. He slammed his head forward toward the shape of her ear as he pelted her with UGLY. He called her a c*nt. Then the women chimed in next. They called her a wh*re. It wasn’t long before the streets erupted with all profanity until dirty of words could not smear her enough, until something solid needed to be thrown. The good people that she had ruled began to toss her with vegetables and fruit before they began throwing stones. The rocks came later and before that there was spit. Wads of it to her face until she had to wipe it with hands made of windshield wipers. She could not see where she was going but if felt like hell.

That experience, Cersei Lannister’s walk of atonement,  is how I would describe my journey of becoming a writer. It’s like standing in front of the world completely naked and then asking the collection, “What do you think of my body from the inside out?”

I have quit more times than I can count and I am afraid always. What have I exposed that can hurt me? What did I write today that hurt somebody else because all things have a ripple: like an oar to tip the water to move a boat to favor, but what of the calm before then? What if I want the boat to be still, so I can look out into the night sky to wish on the moon instead of stars because at least I know with that I can make it real. I can get to the moon. I can make it that far. Should I really be reaching further?

Maybe I should keep my mouth shut? Maybe I should listen to the nature around me in silence. Except the nature around me is noise and pollution. We drive to the forest to escape our own progress only to hike up a mountain and find that at the top is a pack of humans completely wired with technology. The same humans remembered to bring speakers for their iphones. They were playing Pandora during our stairway to heaven. The experience was sacrilegious. You monsters are people stop scaring the animals while you feed them.

I am guilty of many sins I despise and yet I know that unlike Cersei Lannister I am completely and beautifully good. I have complete and unwavering faith in the honor in which I tell my life story and this is my life to write about it. It is not his life to be private with. It is my life to protect and I do. I do want to protect the people I love and most of them do not want to be looked at in scrutiny. Some would prefer to not be known at all and I never respect that. I simply can’t.

My words are a Polaroid picture. I want you to remember yourself shaking the shiny white square. Did you blow on it thinking that picture would come faster? Is that why you shook the picture or did you know the film is time lapsed? Or was is time lapsed?

What you think you know you don’t. The picture that you see may have actually been lived in a different color and as for your right to privacy, and his, knowing you in remembered detail is the only love I know. I will remember you like a verse to one of my favorite songs. I will paint your portrait by description, by muse and introspection, by relevance. If you are on my path of importance you will be known. End of story, keep reading, and then follow. I am a writer. If you are in my life you will walk the pages of my books even if the world does not know your true face. It’s scary, I know, people wear clothes for a reason. #nakedandafraid