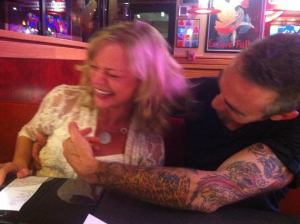 “Be nice!” he pointed at me begrudgingly. “Don’t be mean to the guys who are messaging you. They are reaching out in kindness. Be nice to them.”

I folded my arms and stuck my tongue out at him. “I do not want to be nice. I can’t handle the level of stupid that most guys are. They have nothing to offer but grunts.” I began pounding on my chest like an ape. “Look at this guy,” I said, pointing at the screen. My fingers moved to fly across my keyboard, “You have NOTHING going on for you.” I hit send in reply to the profile and lame ass message. My ex-boyfriend frowned at me while he watched, then he smiled, scratching his head. “OK if that is really what you want to do, but do you really think you are going to find the right guy using those methods?”

I glared at him before softening. “I thought you were the right guy and now I am sorting through barrels of monkeys. Do you even know how much I hate you right now?

He ran his fingers through the salt and pepper of his hair. “That’s what you keep telling me. Can I bring you down some breakfast?”

“That would be great,” I said, as I turned back to the arduous task of dissing guys on the inter web. “No, No, No!”

This can’t be happening…

It has happened though. I am single again and for me it is the equivalent of being severed from the life I want for myself. I am what you would call a stage five clinger and if you are a single man I assure you that you have nothing to fear from me because at this stage of the game I am only clinging on to one thing and that is that I will have what I want. I will have what I want and I do not just want any man. I want the guy who knows his own power and unfortunately for me very few do.

And who am I to make that judgement?

I am a woman who could easily, should easily, be breaking hearts. I’ve known that power within myself for my entire life and yet I have never allowed myself to use it. It’s like holding a nuke in your hand. The responsibility of love is exactly that gut bomb and so I have always been selective to the exclusion of most all seemingly eligible bachelors. I am careful because I know that in the end it will be me that takes the implosion of soul if the relationship ends and they sometimes do. I have ended every relationship I have ever had except one and then I mourn as if it weren’t my choice. I cry because it was the right choice and one I never want to make again. I hate letting go when I am in love. I also refuse to hold on to what isn’t right for me. My last boyfriend was not right for me, but he is an incredible friend.

“I put cinnamon in your oatmeal,” he said as he placed the bowl in front of my computer like an offering to make me smile again. “You are going to have a good day today. No tears…”

I looked up from typing to smile my gratitude. “Yes, no tears today. Today I will let the boys cry instead. I have better things in store.”

He stood there for only a few seconds more before turning to head back to his floor of the house we still share. “I believe in you. I want you to know that I know you will win. I can see your dreams coming true even of you can’t. I am proud of you.”

I would have kissed his cheek to thank him for his sweetness if I hadn’t already promised myself that this new day without him would be a happy one.